× Bidding has ended on this item.

Invoice: Invoice will be emailed at end of Auction.

Payment: Due End of Sale Day (or by special arrangement)

Refundable Cleaning Deposit:
$50.00 added to purchase price. Deposit in cash by Harris Auction or mailed check upon satisfactory clean out. Items not removed will be considered abandoned and will be disposed of and deposit forfeit.

REMOVAL 10days:
TUE 8/9/22 by 3PM (or by Special Arrangement)
or Buyer must make application for Hangar Rental
If no arrangements are made Aircraft not removed will be considered abandoned.

With paid sales receipt (or by special arrangement) (see full terms & conditions).
If you are unable to make these time work Text or Call Ralph (928) 713-2385

Legal Disclaimer - Sold “As Is”, “Where Is”, “Condition Not Known”, with No Guarantee to Size, Authenticity, Origin, Make, Model, Material, Use for a Specific Purpose, Operability and/or other Safety Standard(s), including any Recall Notice. Follow the Manufactures Instruction / Owner's Manual & Warnings. Not Responsible for Damage, Theft or Personal Injury. 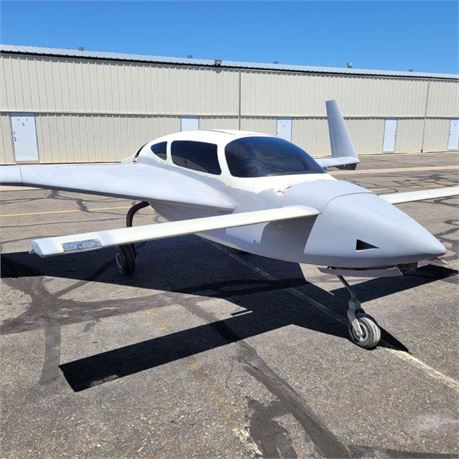 Research:
The Original or Standard: The earliest Velocities (pre-1997) were all small, 4-seat aircraft. The Fuselage on the Standard is about 16 feet long and the overall length of the aircraft is about 19ft. (The tips of the wings extend aft of the fuselage, accounting for the extra length.) Typically, the Original or Standard fuselage is paired with a 180 – 200 horsepower engine.
The hatch-top: For the first 10 years, all Velocities had a hatch door in the top of the fuselage. The pilot and passengers enter the plane by jumping to a seated position on the strake (front part of the wing) and swinging their legs into the cockpit. A few of these planes were later retrofitted with an "air-stair" style opening, in which the hatch top lifts up and the bottom portion opens down.

Company was founded in 1984 by Danny Maher
Long-ez of Neil Hunter, He wanted to make the plane more comfortable, with more space, and more upright seating marketing a four-seat homebuilt aircraft based on the Long-EZ design.
The first prototype flew in 1985.
1986 Scott and Duane Swing of Dayton, Ohio bought their first Velocity Kit.  Later they decide to design and build a retractable gear system, and work closely with Danny during it's development In March of 1997 Velocity debuted the XL (October 1997 Kitplanes "XL Debut" 13), an "Extra Large"
The company was sold to Scott and Duane Swing in 1992
In 1995, the cockpit design was changed, adding a gull wing door design.

The Velocity is a true high performance airplane with the ability to make 1000 mile cross country trips at speeds in excess of 200 kts while carrying four adults and baggage in total comfort and ramp presence styling. With the rear mounted engine, the noise, propeller turbulence, engine heat and fumes are behind you, providing an atmosphere comparable to a modern sports sedan. Extremely crisp controls and excellent aerodynamic stability allows the Velocity to fly as if it was mounted on rails, allowing you to travel long distances with minimal pilot load and still dogfight with the best of the two seat sport planes